Crossing of Tournai by the Scheldt: navigation at European gauge Va is open!

Last January the first phase of the modernization work on the Tournai crossing ended with the opening to navigation for class Va boats, i.e. boats with maximum dimensions of 110 m (length) by 11.40 m (width) for a deadweight tonnage of some 2,000 tonnes.

A major objective for the overall modernization of the Walloon network of inland waterways, it is also an important step for the European Seine- Scheldt project, which will provide a continuous large gauge navigation axis between the Parisian area (Ile-de-France), the Seine estuary, the North of France, Belgium and the Netherlands

This is a big step forward in river transport. In 2018, 41.5 tonnes of freight were transported on the Walloon waterways, the equivalent of 2 million heavy goods vehicles that would have been added to our motorways and roads otherwise. 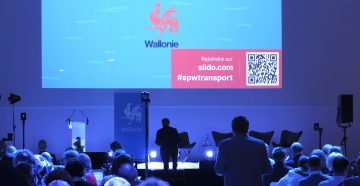 WALLONIA
Inland waterway transport and intermodality in the spotlight in Wallonia!
On 18 October 2022, the Service Public de Wallonie (SPW), organised its traditional day...