With 1,100 km in wide-gauge infrastructure, the Seine-Scheldt network in France, Flanders and Wallonia offers the European economy a wider, unsaturated space that is connected to major conurbations, five large seaports and their network of inland ports.

A new industrial and logistics network

This multimodal industrial and logistics network is a new offer of transport services within the trans-European priority network, which will benefit the competitiveness of the different industrial sectors and the economic development of six European region: Normandie, Ile-de-France, Grand-Est, Hauts de France, Flandre et Wallonie.

By connecting Paris and Le Havre to the main North Sea ports, it will provide a link between the main industrial, logistics and commercial centres of Northern Europe, especially through the construction of the Canal Seine-Nord Europe, a 107 km section of wide-gauge waterway. Crossing the Hauts-de-France Region and linking the Paris Basin to Northern Europe, this will represent an essential component of the development of the network.

Seine-Scheldt is also the 1st European priority project, developed in partnership between France, Flanders and Wallonia. This Franco-Belgian cooperation will develop the network by constructing new infrastructure (bridges, locks, upgrading the gauge of the waterways). This development of the network will enable increased and more fluid European goods traffic by 2030, along with the sustainable implementation of an effective modal shift from the road to the water, while developing multimodality with other modes of transport, especially rail.

By thus repositioning French waterway transport at a European scale, Seine-Scheldt will become a flagship and priority network at the heart of the European network of multimodal corridors.

THE GOVERNANCE
OF THE SEINE-SCHELDT PROJECT

The Seine-Scheldt project is a partnership project between France and the Walloon and Flemish regions of Belgium, with the following objective: by widening the gauge of 1,100 km of waterways, to create a new multimodal network to develop the regions.

In order to ensure integrated coordination of this major project, an Intergovernmental Commission (Seine-Scheldt IGC) and a European Economic Interest Grouping (Seine-Scheldt EEIG) have been established.

The French, Flemish and Walloon governments will thus handle the strategic management within the Seine-Scheldt IGC, which sets the main policies for the project. Operational coordination is then provided by the Seine-Scheldt EEIG, the members of which are Voies Navigables de France, De Vlaamse Waterweg nv and the Service Public de Wallonie, the respective operators of inland waterways in France, Flanders and Wallonia, as well as the Société du Canal Seine-Nord Europe, in charge of the design and construction of the Canal Seine-Nord Europe.

The European Union, the main financial backer of the project, is regularly associated in the work and meetings of the IGC and the Seine-Scheldt EEIG.

The European Economic Interest Grouping (Seine-Scheldt EEIG) is a partnership body tasked with coordinating the Seine-Scheldt project. Established on 26 March 2010, it is now composed of 4 partners: Voies Navigables de France (VNF), De Vlaamse Waterweg nv, Service Public de Wallonie (SPW), the respective operators of inland waterways in France, Flanders and Wallonia, as well as the Société du Canal Seine-Nord Europe (SCSNE), in charge of the design and construction of the Canal Seine-Nord Europe.

Seine-Scheldt is a partnership project to construct and pool, between European regions, an integrated logistics system to establish sustainable added value in industry, agriculture, construction and public works and the circular economy.

The construction of this logistics system goes beyond regenerating river works along the 1,100 km of the network and creating the missing link, the Canal Seine-Nord Europe. It requires the development, on a European scale, of a cooperation project with all the local authorities, manufacturers, logisticians, carriers, seaports, inland ports, waterway, rail and road infrastructure operators to establish modern, secure, clean, multimodal, innovative, connected and digitised logistics that will benefit public policy and the European economy.

EUROPEAN FINANCING
OF THE SEINE-SCHELDT PROJECT

To supplement local and national financing, the Seine-Scheldt project enjoys considerable European financing. In fact, considering the importance of the project at the heart of the European multimodal transport network, the European Union has decided to finance 40% of the cost of the works and 50% of the cost of the studies over the 2014-2020 period, after providing initial support of €420 million during the 2007-2014 period.
The European Union has also committed, through an implementing decision signed in June 2019, to continue its support to the project during future financing periods, with the possibility of financing up to 50% of the cost of the work. This crucial support makes Seine-Scheldt one of the most important European Union transport projects and the most vital for the continent’s waterways. 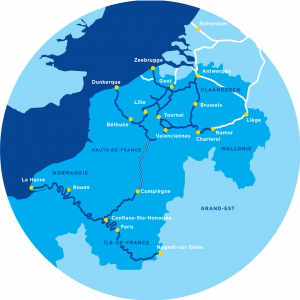 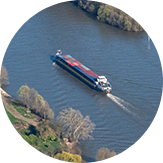