At the opening of the Connecting Europe Days in Lyon on 29 June, the European Commission announced the allocation of a new grant of €276 million to the Seine-Scheldt waterway network under the first call for projects of the Connecting Europe Facility (CEF) for the period 2021-2027. This  follows the first two grants awarded for the periods 2007-2013 (€176 million) and 2014-2020 (€539 million).

Resulting from an unprecedented Franco-Belgian cooperation, the Seine-Scheldt European Economic Interest Grouping (EEIG)[1], which was created in March 2010 to coordinate the implementation of the network, gathered around its manager Marie-Céline Masson -VNF’s Nord-Pas de Calais regional director- thanks the European Commission for its renewed exceptional support. This is a very powerful message in favour of an investment in the future (a total of 10.5 billion euros committed by the partners) for the mobility of goods and people, economic development and the ecological transition of the territories.

In accordance with the implementing decision adopted on 27 June 2019 by the European Commission, Seine-Scheldt is being progressively implemented between now and 2030, through the modernisation and regeneration of the existing waterway network and the construction of a new 107 km river link – the Seine-Nord Europe Canal (CSNE) – between the Seine and the Scheldt river basins. This third European grant will finance in particular:

New projects will be proposed by the EEIG to the European Commission in the future CEF 2022 and 2023 calls, in order to support the implementation of the Seine-Scheldt project, in particular the construction of the Seine-Nord Europe Canal, on the 2021-2027 programming period.

With 1,100 km of wide-gauge waterways, Seine-Scheldt will be the largest European inland waterway transport network, suitable for vessels carrying up to 4,400 tonnes of goods (the equivalent of 220 trucks) over a territory of 40 million inhabitants between France, Belgium and the Netherlands. It will guarantee a new multimodal, efficient and sustainable transport offer by linking 5 seaports, 60 inland ports, 90 leisure ports and 360 municipalities located near the waterway. It will generate more than 175,000 jobs during and after construction. This project offers a solution for modal shift to the waterway that will help achieve the objectives of decarbonisation of transport set by the European Green Deal. 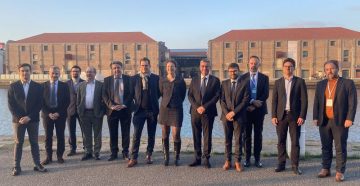 THE EEIG
Seine-Scheldt: an exciting project going from strength to strength in 2022
The flagship theme for the 2022 edition of Riverdating is the Seine-Scheldt network...

THE EEIG
Press release: Europe’s support for the Seine-Scheldt project: €276 million contracted
End of June 2022, the European Commission announced the allocation of a new grant of €276 million.. 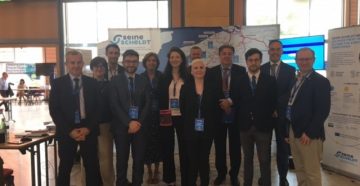 THE EEIG
In Lyon, Seine-Scheldt connects Europe!
As part of the Connecting Europe Days, organised in Lyon from 28 to 30 June 2022, the members of the EEIG..